Mira, star of the hit Disney Junior series “Mira, Royal Detective,” recently paid a visit to Walt Disney World Resort, on a special case to track down her missing mongoose friends, Mikku and Chikku. Her adventure, which took her through all four of the Disney theme parks, was being filmed for a special Disney Junior video celebrating Diwali, the holiday festival of lights in India. Have a look!

Mira’s special appearance at Walt Disney World Resort was for just one day, but you can spend time with other Disney Junior friends every day at Disney’s Hollywood Studios. Disney Junior fans are invited to join the fun at “Disney Junior Play & Dance!” in the Animation Courtyard. Each party performance throughout the day features a dynamic DJ spinning favorite songs from Disney Junior TV shows, plus special onstage appearances by Disney Junior stars, including Roadster Racer Mickey. And returning after the holiday season, Disney Junior Stars Motorcade brings favorites like Doc McStuffins, Fancy Nancy and Vampirina to the park’s Hollywood Boulevard.

Disney Junior’s “Mira, Royal Detective” is an animated mystery-adventure series for preschoolers, inspired by the cultures and customs of India. Set in the fictional land of Jalpur, the series follows the brave and resourceful Mira, a commoner who is appointed to the role of royal detective by the Queen. Along with her friend and talented inventor Prince Neel, creative cousin Priya and comical mongoose sidekicks Mikku and Chikku, Mira will stop at nothing to solve a case. Each episode features two 11-minute music- and dance-filled stories which showcase Mira utilizing critical thinking and deductive reasoning to help her family, friends and extended community.

You can catch “Mira, Royal Detective” every day on Disney Junior and in the DisneyNOW app.

Fresh off the hooves of the news that an endangered white male rhino calf was born earlier this week at Disney’s Animal Kingdom Theme Park, we are thrilled to share a sneak peek of the newborn.

The video below features endearing moments as mother Kendi bonds with her playful, yet-to-be-named baby. He is curious, loves his afternoon naps and has started sparring with his mom.

We hope you enjoy this look at the beauty of nature as much as we did. The young rhino will join the herd at Disney’s Animal Kingdom in the coming weeks.

The pocket of East Coast states, notably New York, New Jersey, and Connecticut have had severe quarantine restrictions in place since early summer. 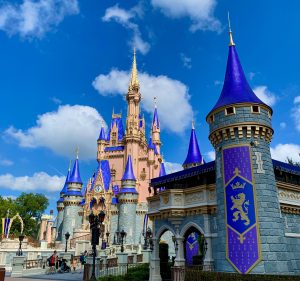 Under the previous rule, anyone visiting a high-COVID state, such as Florida, and then returning to the New York tri-state area, would have to quarantine for a full two weeks upon their return. For New York area residents, this made travel to Walt Disney World wholly impractical, effectively prohibiting a timely return to work or school after a Disney trip.

Beginning on Wednesday, November 4, 2020, this policy has been overhauled. While New York and environs now continue to discourage travel to hotspots, there is now an alternative to the 14-day quarantine.

The new rules state that all travelers from non-neighboring states planning to stay in New York for more than 24 hours will now be required to quarantine for at least three days and then test negative for COVID-19 and present proof of a negative test before leaving quarantine.

People who choose not to obtain a COVID test will still be required to adhere to the 14-day quarantine.

For many New Yorkers, this will move holiday travel to Walt Disney World back into the realm of possibility.

Will this change in procedures change your winter travel plans? Let us know in the comments.

From our friends at touringplans.com
Filed Under: Walt Disney World (FL), COVID-19

Eleven-year-old Lowri Moore, from Nottingham, England, wrote a letter to Bob Iger last year requesting the creation of Disney princesses that wear glasses. According to BBC News, Lowri, who wears glasses, said that she wanted to see more characters “wearing glasses like me.”

Lowri’s letter to Bob Iger read: “I’ve grown up watching Disney princesses and I’ve always admired them and thought they were beautiful. Unfortunately, none of the princesses wear glasses and that made me feel as though I’m not beautiful enough.”

Lowri described that the Disney characters featured with glasses were typically portrayed as “geeky or nerdy instead of beautiful.” She felt so strongly about the need for a glasses-wearing Disney princess that she came up with her own!

A local illustrator, Natalie Owen, heard about Lowri’s letter and character idea, and was a Disney fan herself- so she decided to help out! According to BBC News, Owen decided to create the story, ‘Princess Rose and the Golden Glasses,’ featuring a beautiful princess in an orange gown and, you guessed it…glasses!

Lowri was thrilled about the glasses-wearing princess- “The illustrations are amazing and I’m so excited this has happened. Rose has blue-ish glasses, brown long hair, kind of like me. Even if it’s not Disney it’s still a role model for young people. I’m happy I got to create one.”

Lowri’s mother was also touched by the new book- “[The character] thinks she’s not beautiful because she’s wearing glasses. A bit like someone else I know. And she goes on a bit of an adventure where she discovers she actually is beautiful. To come from a nine-year-old’s mind it’s so clever. I’m super proud.”

Although there is no response from Disney to Lowri’s letter, it would be great to see a glasses-wearing Disney princess in the future!