With the grand opening of Galaxy’s Edge, Docking Bay 7 quickly rose to top of the charts for quick service dining in Disney’s Hollywood Studios. Ranked above average at #38 out of 106 quick service locations at Walt Disney World, Docking Bay 7 combines familiar foods with unique twists and Star Wars-inspired names.

Here’s what we ordered 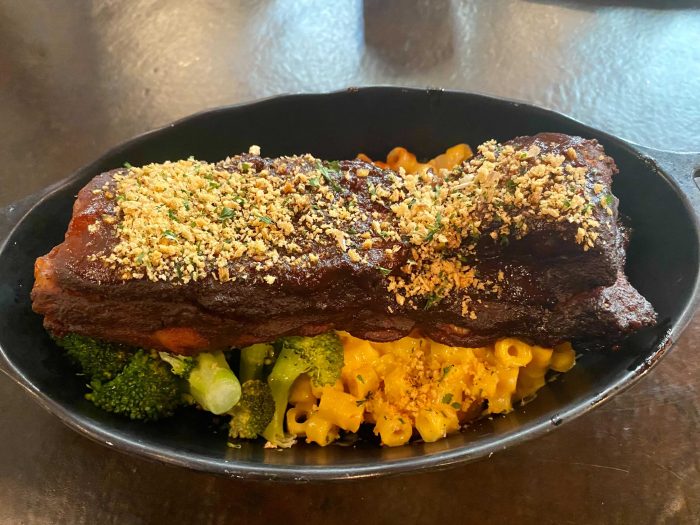 First thing you’ll notice about this dish is that you aren’t seeing cabbage slaw or a blueberry corn muffin on that dish. That’s because the mobile ordering through MyDisneyExperience allows you to customize the sides for your dish. This is the macaroni and cheese with vegetables option. 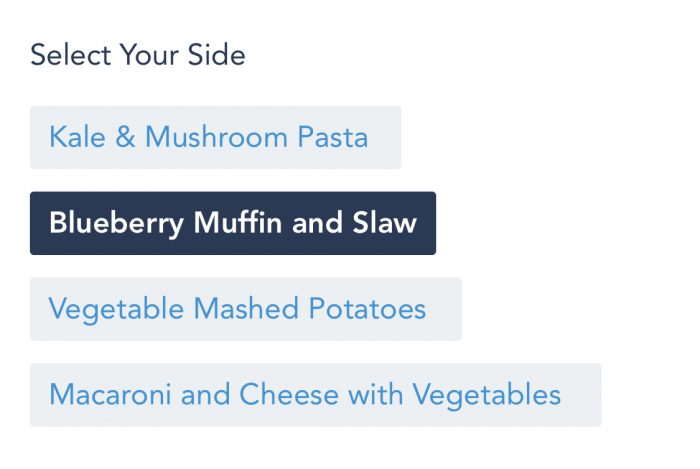 The ribs itself was a huge portion, which is a good thing. One thing that was surprising because it is not mentioned in the description is that the sauce on the ribs has quite a kick to it. Even though we’re not averse to a bit of heat to a meal, this was almost too spicy to eat for our tender tastebuds. 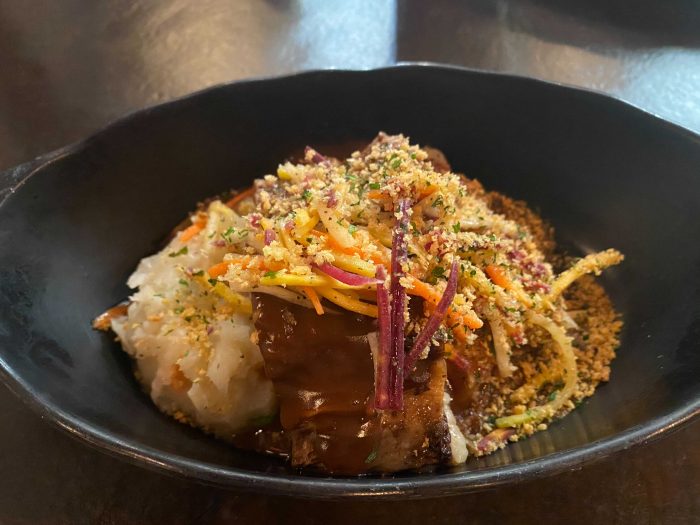 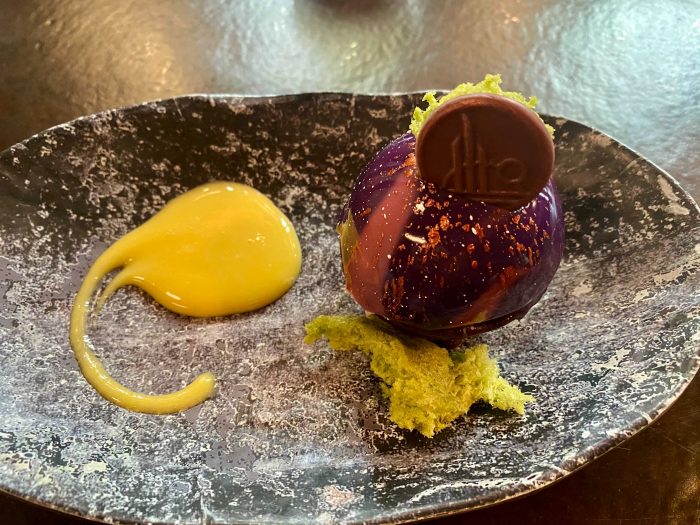 This dessert is simply gorgeous, and unless you’re getting it just for pictures, it is one we’d pass on. The coffee flavor wasn’t present at all, the chocolate shell was hard to crack through, and the chocolate cake was on the dry side. There’s plenty of other treats to find in Hollywood Studios, so we’d suggest skipping this for something else.

Even with its limited menu, Docking Bay 7 still provides good options for a solid meal.

Are you a fan of the food at Docking Bay 7? Do you have a favorite? Let us know in the comments.

The post Docking Bay 7 Continues to Serve Out of This World Food appeared first on TouringPlans.com Blog.

Ever wanted to feel like Jabba the Hutt? Probably not, but you can sip in style at Star Wars Galaxy’s Edge with a sipper inspired by Jabba’s favorite snack. The Paddy Frog Sipper is now available at Docking Bay 7 Food and Cargo. This sipper caught lots of attention as our field team picked one up yesterday and strolled around Batuu.

You can order up your own sipper at Docking Bay 7 with either your choice of Coca-Cola beverage or Moof Juice which is a blend of Simply Fruit Punch, Simply Orange with Pineapple, and Chipotle-Pineapple. With Coca-Cola products the sipper is $15.99. With the Moof Juice it is $17.49.

There is a Paddy Frog figure at the bottom of the sipper, and it lights up which looks really cool at night. It adds to the unique atmosphere of Galaxy’s Edge and would look great alongside a themed outfit. Our team has been debating as to whether the Paddy Frog species is also that of the Frog Lady in The Mandalorian. Everything I’ve seen indicated they are two different species, and that the sipper is Jabba’s favorite snack and not an endangered species, but we’d love your input too.

Are you a big Star Wars fan? Would you hand over your Galactic Credits for one of your own?

The post NEW – Get Your Galactic Credits Ready for the Paddy Frog Sipper at Star Wars Galaxy’s Edge appeared first on TouringPlans.com Blog.

There’s so many places to dine at Disney Springs it can be easy to overlook a few spots. Admittedly we had kind of forgotten about Terralina Crafted Italian Restaurant, so Chrissy on our team decided to give it a try. There were some highlights of the meal, but also some misses. Here’s what we did, and didn’t like, at Terralina.

This rustic Italian restaurant is a concept of Levy Restaurant group which runs multiple restaurants on Disney property, and around the country. Terralina Crafted Italian Restaurant used to be known as Portobello Country Italian Trattoria. In 2017, when Disney Springs began to blossom, Portobello became Terralina, with an updated look and new menu. The interior is very rustic and intimate, with a fireplace, making it a cozy spot for those rare chilly nights in Orlando. There is a nice selection of outdoor seating, and an intriguing outdoor bar. This outdoor bar is accented by a colorful light fixture and offers views of bustling Disney Springs as fellow guests stroll by.

To kick off the dining experience Chrissy order the Mediterranean Martini and the Limoncello Mojito. Both cocktails are spot on for fitting the Italian menu. The Mediterranean Martini (picture below on the right) is made with Malfy Limone Gin, Elderflower, Lemon and Simple Syrup. It was perfectly refreshing and a little sweet. The Limoncello Mojito is a simple combination of Árvero Limoncello, muddled mint, and simple syrup. This cocktail is very light and a good choice if you want a drink that won’t slow you down for the afternoon or evening. Both are $15.00 which is on par with most mixed drinks at Disney.

The menu at Terralina retained a few “favorites” from the days of Portobello. One of the standout items is the Antipasti Tower. This two-tiered tower has Prosciutto, Spicy Capicola, Grana Padano, Bocconcini, Tomatoes, Pickled Vegetables, Grilled Zucchini, Parmesan Crisp, Olives, House-made Pecorino-Truffle Potato Chips. At $37.00 it is a bit pricey, but it sure does make an impression. It is meant to serve two people and it really is ideal for nibbling on while sipping on some Italian wine or a craft cocktail or two. The serving is substantial.

Some items on the tower stood out for their quality. Other items fell short. The giant Parmesan crisp that crowned the tower was stupendous. The pickled carrots and tomatoes added a lovely brightness. The beets were earthy and the mozzarella was delicious. The rest of the cheese selection did not impress Chrissy all that much, but the quantity was there at least. The grilled zucchini wasn’t really seasoned or well grilled. The House-made Pecorino-Truffle Potato Chips were not as flavorful as one would hope.

Where Terralina shined for Chrissy’s dining experience was in the desserts. It was impossible to resist the Espresso Sundae, with Fresh Brewed Espresso, Vanilla Ice Cream, Pizzelle Cookies, Chocolate Sauce, and Toffee Crunch. Espresso and ice cream is a popular combination for dessert after a heavy meal with lots of Italian wine; it’s a definite pick-me-up. At $9.00 it is an impressive, and scrumptious, dessert.

The Double Chocolate Cake is different than a standard chocolate cake. It is garnished with Caramel Sauce, Toffee Crunch, and Fresh Berries. At $10.00 it satisfied and was a good choice. Between the two desserts Chrissy ordered, the Espresso Sundae takes the lead.

Overall, Terralina Crafted Italian is a decent choice, but there are better options at Disney Springs. We have ratings and ranking for every Walt Disney World restaurant. Our readers give Terralina a 70% thumbs up rating, and it is ranked pretty low at number 102 of 106 table service restaurants at Disney. Better options for dinner at Disney Springs include Wine Bar George, The BOATHOUSE, and Homecomin’.

Have you dined at Terraline Crafted Italian before? What did you think of it?

The post REVIEW – Terralina Crafted Italian Restaurant is Great for Sweets but Misses the Mark on Savory appeared first on TouringPlans.com Blog.

Many Disney fans have been looking forward to the arrival of Everglazed at Disney Springs. This donut and cold brew coffee shop would bring a much-needed breakfast option to West Side. Things looked bright for this Florida-based business to open when in November they announced they were hiring, and did so again on their Facebook page at the end of December. But, since that time there’s been no sign of opening soon.

During a recent visit to Disney Springs we popped into Guest Services to check on a few things, one of which was the status of Everglazed. We’ve been told it will not open until March. This news comes just as Gideon’s Bakehouse announced it would close immediately, but temporarily. No word yet on the reason for the delay of Everglazed, or the news about Gideon’s. 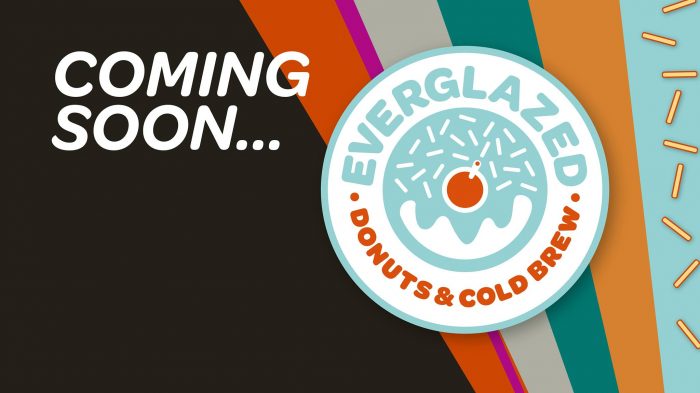 Are you a fan of donuts and cold brew coffee? Are you excited about Everglazed or not so much?

The post Here’s What We’ve Been Told About the Opening Date of Everglazed at Disney Springs appeared first on TouringPlans.com Blog.

Not too long ago we posted a guide on how to navigate Walt Disney World by foot. One of our awesome readers pointed out that Disney’s Coronado Springs is walkable to Winter Summerland mini-golf and Disney’s Blizzard Beach, as well as the McDonald’s near Osceola Parkway. Ivonne on our team kindly obliged to embark on said walk. With photos and tips, here’s how to walk from Disney’s Coronado Springs to Blizzard Beach, Winter Summerland, and McDonald’s.

First, let’s start off with the big challenge this walk presents. There is no sidewalk leading out of Disney’s Coronado Springs. When you walk towards the front entrance of the resort there is no sidewalk, so you’ll need to be very careful and aware as you walk on the road leading in and out of the resort. Please pay attention, and look and listen for traffic (insert stern mother voice here).

If you wish to continue on to McDonald’s continue to follow the sidewalk. You will come to an intersection with an overpass for Osceola Parkway. Continue along the crosswalk to go under the overpass and you’ll see the McDonald’s just a few more steps away. It generally takes about 10 more minutes from Winter Summerland to the McDonald’s.

It is important to note that the McDonald’s does not have any seating available right now. That’s right, this brand new, state-of-the-art McDonald’s has closed all of its seating for the time being. Only its drive-thru is open.

Going beyond the McDonald’s, the sidewalk continues over to the currently closed All-Star Resorts.

Have you stayed at Coronado Springs Resort? Would you walk to Blizzard Beach, Winter Summerland, or McDonald’s?

The post How to Walk from Disney’s Coronado Springs to Blizzard Beach, Winter Summerland, and McDonald’s appeared first on TouringPlans.com Blog.